Is there anything harder than seeing your child excluded from activities with other children?

Watching your child be excluded from the group, the party or the class is so painful that it is almost unbearable.  How do you cope? I wish there was an easy answer but there just isn’t. It is a feeling that is universal.

Sure there are worse things, but it hurts to your very core to watch your child hurt by other children. To see them left out of fun activities. Whether it’s a birthday party, playgroup, or any social event, it feels unbearably lonely. For you and for them!

As a parent, you are hurt more by your child’s disappointment than your own.  And you enjoy their successes much more than your own. Every emotion is heightened with your children. Maybe it’s that you understand the stakes are so high or maybe it is just that deep connection between parent and child.

When my son was about 5, he sometimes played with a small group of kids outside in our neighborhood. One day he came back inside crying. The other children had gone into a house to play, but he was not allowed to come inside.  He watched them from the glass beside the front door.

I honestly thought my heart would break. My husband and I decided to go down to the house and talk with the parents. I held back my tears as we walked a few houses down.

When we arrived, the mother came to the door.  We explained that we needed to understand why he was not allowed to come in with the other children. We were calm and explained that we really were trying to help him be more appropriate in social settings.  That we hoped she would help us, help him.

Of course, I did not manage to hold back the tears as I talked to her. She explained that he was just too unpredictable and too impulsive.  She felt nervous with him inside. We thanked her for the information and returned home.

Part of me wanted to punch her in the face and tell her she was a monster for hurting my child.  But part of me also understood how hard he could be to manage. It was the same conflict I would feel again many times in the future when I sought understanding from other parents. I knew why they couldn’t or wouldn’t give me that understanding.

Was I giving them an out too easily or was I expecting more than I should from them? They didn’t have to be capable of managing a difficult child and having the patience to spend extra time helping a child not their own. I had an infinite understanding of a child with behavior problems, but I couldn’t expect the same from parents that did not have those same challenges.

While many parents might drop off a child at a birthday party and have an hour or two of freedom, I could not afford myself that luxury. Unknowing parents would tell me to leave, but I knew that was not a safe choice. I might have to settle a dispute, calm him down if he became over-excited or angry, or remove him briefly from the other kids if he got overstimulated.

I had a party for him when he was about 6 and invited some of the kids from his EBD classroom to the party. Each mother came and planned to stay, but I gently explained that while I understood their need to stay, it wasn’t necessary. I reassured them that helping their child through a meltdown did not mean I saw them as deficient parents or their child as bad or broken. 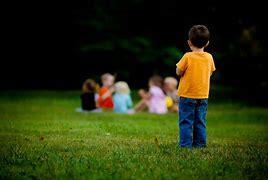 We played putt-putt, and one little boy could not cope with doing the holes out of order. He was prepared to go to the next hole and screamed and became totally stiff every time we moved around the course instead of going to the next hole. I calmly picked him up at each and carried him to the hole where we were directed. People around me were horrified, but I was not. I understood his discomfort and was able to ignore the stares and comments that came my way.

Stares and judgmental comments become a part of every day when you have a child who has vocal and loud outbursts in public places.

My stress level and fatigue always played a big role in how I managed those meltdowns. If I was calm and rested, I was able to cope relatively easily. If I was frustrated or tired, it usually didn’t end well. Random comments from strangers never helped in either case, but they were frequent and often harsh.

Seeing your child in pain will bore a hole in your heart. If your child has behavior issues or social interaction problems, that pain will be frequent and real. Your child will be excluded and other parents will be quick to judge and gossip. They never realize they are using your perceived failures as a parent to make themselves feel superior or successful at parenting. I wish I could say that they do less of that as your child becomes older but sadly, they do not.

You will find, very rarely, a sympathetic mom or dad that will see you as a struggling parent, not a failing parent. They will see some of the many good qualities your child has and make attempts to help and support you. Hold on tight to those precious friends. They are a lifesaver for you and your child.